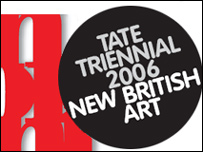 Every three years we enjoy the variety and surprise of the milestone that is the Tate Triennial here in London.

Back in 2006 for the Resonancefm series Arting Around, we spoke to one of the Triennial curators Catherine Wood. Since the Tate are now collating material for the next Triennial in 2009 it’s seems a good time to look back.

I’d just finished a spate working at the Tate then and for those often in the gallery, the Triennial offered intriguing points as an exhibition due to the way the space was used and audio featured, it certainly gave the place a certain vibrancy.

The audio part of the exhibition was advertised as “electronica” and sound performance. This is of course of some interest to anyone working in audio for the arts as I am, I suppose as the Triennial was proclaiming itself to be exploring what was new in recent art, and sound was featuring more than ever this was a significant step forward for the medium. It was also a precursor to plans for the new section at the Tate no doubt, where it is said that audio will play a much larger role in the future.

Although we missed the soprano performers programmed in the gallery, we attended the screening of the Daria Martin film Loneliness and the Modern Pentatholon (still, pictured below) and enjoyed the following performance of Zeena Parkins’ electronic harp set with foley sounds in the Turbine Hall. We played out some of the Zeena Parkins audio on Arting Around when it broadcast live, below is the interview with the curator Catherine Wood.

See you at the next one!

Shelectronica: remembering the women behind the BBC radiophonic workshop