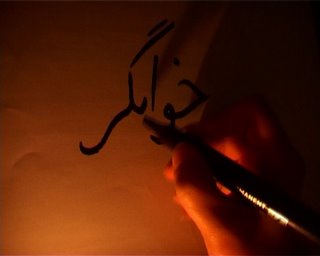 I made some short films, they were shown. One was a poem film, from which this still comes. It is called “Sleepwalk“. Lots of fun making the soundscape, which in itself is a piece. It was a great precursour to these, my ‘back to Iran’ days. My unckle colin said after the screening, however, that is was ‘a sad film to come from such a bubbly person’. We all have our wells. Mine is filled with sounds and images of Iran, see Kiarostami’s ‘Five’ for the perfect audio of a Tehrani childhood.

Now I feel I need to make another one. But I have so many projects including a play that is rubbish, even though the BBC have approved it. I cant type anymore as I am being invaded…

Art Guerrilias – don’t give up the day job…..